Android P Beta , public beta first impressions and news. Android P beta version is out. We have been using it since it launched and here is our review about Android P’s first look and everything you need to know about it. Android P will have a new system navigation interface in order to make multi-tasking easier to understand, with a single clean home button. It’s very much an iPhone X horizontal bar to replace the typical home and recent buttons.

This is part of Google’s plan to make the UI simpler and adapt to the all-screen phone designs out there.

You’ll be able to swipe up from the bottom anywhere in the operating system to see recent open apps as well as five predicted app at the bottom of the screen to save you time. Swiping up a second time and you’ll see your app drawer. With this one-two swipe gesture, Google has essentially combined the all-apps and overview spaces gesture into one.

You can do one better than Apple’s iPhone interface. Android P will let you scroll through all of your apps very quickly by sliding right and left with the horizontal bar at the bottom. It’s like a video you’re scrubbing through, by for app selection.

Android P with dashboard and Shush:

Google’s Android P update includes a dashboard to monitor how long you’ve been using your phone and specific apps. It’s supposed to aid you in understanding, in what you’re spending too much of your time. It helps you to know your behavior.

It’s no secret that we use our smartphones too much, and you probably do, too (you are on a technology website, after all). But how much time?

Like a Fitbit tracker gauges for activity and informs to motivate you, Google’s Android P update includes a dashboard to monitor how long you’ve been using your phone and specific apps. It’s supposed to aid you in understanding what you’re spending too much time on so that you can adjust your behavior. It even comes with an app timer and to send you notifications when you cross a self-imposed threshold, and a new Shush feature is launching as a Do Not Disturb shortcut when you turn your phone over on its front face. In addition to silencing alarms, it won’t even display visual notifications. Think of Google as eliminating both audible and visual noise from your life when these modes are enabled.

It even comes with an app timer, so that you can set a timer for your usage and it will send you notifications when you cross it, something cool right? And there is a new Shush feature is launching as a Do Not Disturb shortcut when you turn your phone over on its front face. In addition to silencing alarms, it won’t even display visual notifications, just roll your phone that’s it. Thank you Google for removing both audible and visual noise from our life.

On the top left corner of the screen. App notification icons pile next to it, which could get dicey if your next Android phone has a notch. Thankfully Google has planned ahead for this. Ambient Display has been improved compared to what came before on Pixel XL and what currently exists on the latest Pixel 2 XL Oreo software. The date and day of week no longer display under the time, but it still displays app notification icons. The biggest change here is that down at the screen’s bottom, it displays the battery percentage, so that you don’t have to wake it to know whether you need to plug in or not. We look forward to Google making more updates to Ambient Display.

It’s a feature-filled Android 9.0 update, with design changes, helpful shortcuts and, already phones that are compatible with the the mobile operating system beta. It’s more than just available on Pixel phones this time around.

You may or may not want to test out Android P beta, so we’ve laid out the visual design changes and how they works. Of course, Google is bound to add to its list of changes in the coming months.

Android P is being designed to give you a more consistent battery experience by using on-device machine learning to figure out which apps you’ll use in the next few hours and which you won’t use until later, if at all today.

With30% reduction in CPU app wake-ups for apps, adaptive battery is producing promising results, according to Dave Burke, Google’s VP of Engineering for Android. He says Google partnered with Deep Mind to refine its deep learning algorithms and it’s having a big effect on Android battery life.

Current auto-brightness settings aren’t good enough, according to Google, and that’s why it’s giving phone makers a more power efficient way to calibrate phone screen brightness based on both the environment and learned behavior. 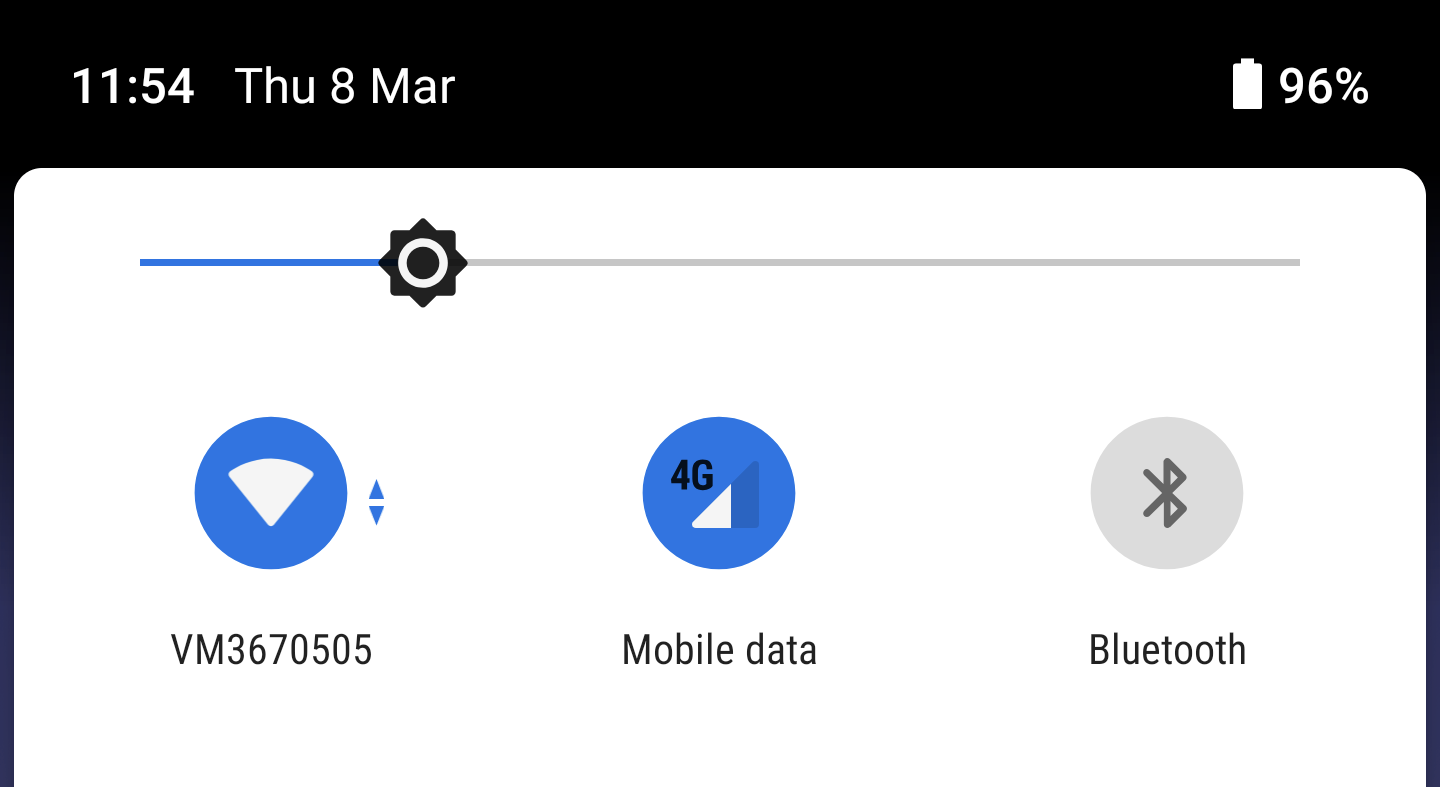 The volume slider is moving again, and this time it’s off to the right side near the volume rocker. That makes sense, but it does more than just get a new home.

Pressing the volume keys will now adjust the media volume instead of sometimes (but you’re not quite sure when) controlling the ringer volume. The ringer can be turned on and off through a software toggle button when you adjust the volume. This makes a lot more sense.

You’ll also be able to manually control screen orientation. This will be done via a pop-up icon that appears when you rotate the screen. You won’t have to rely on the phone to (often mistakenly) rotate the screen for you.

Now the Text is even more sharp, there’s generally more color in the menus, transition animations have been improved. It looks and feels fresh, even in this beta OS.

The Pixel Launcher now has a rounded-off edge, matching the look of notification windows that you see when you wake up your phone. This is obviously a minor touch, but it plays into the overall look that Google is going for with P. 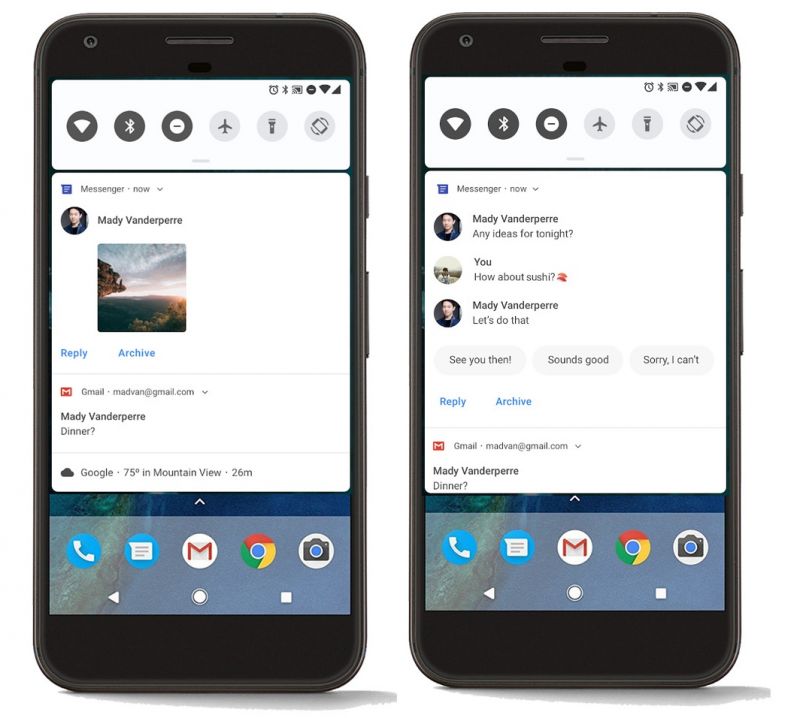 Google is inserting more prediction tools into its app drawer. Previously, you’d see a top row of predicted apps, normally based on your usage history. That was helpful.

Android P goes a step further with app actions that predict what you’ll do next, and these shortcuts sit in a row right underneath the predicted app icons. This boils down to shortcuts for calls, or a run routine based on the fact that you just plugged in headphones and run every day at this time with an app like Strava. It’s like Android P is reading your mind.

You may not see app slices right away when Android P launches, but Google is issuing an API to developers to create more shortcuts around its operating system interface. This is starting is search, of course (after all, this is Google, we’re talking about).

The best example at Google IO was with the ride-hailing app, Lyft. Searching for ‘Lyft’ will provide the app as an answer, but also shortcuts to your top destinations, like work and home, each with a price already listed. It’s saving you from having to go into the app menus in order to select these options.

App slices via the search bar can extend to Google Photos, too. If you look up Hawaii, you’ll see photos from a vacation, for example, and checking into a hotel may soon be easier when you look up your hotel name. Instead of having to wade through the clunky third-party app, you may be able to just select ‘check in’.

You download the Android P beta today, or wait until August, when Google is likely to launch the final version of its operating system update. That’s when we saw the last Android update release date a year ago.

Google launched its first developer preview in early March 2018. So some people have been testing Android P ahead of its public beta debut. The cadence of beta updates will pick up, according to Google’s vague release date timeline. Expect more versions of the Android P beta as time goes on.

It will be available first for Google phones, but it will also likely make its retail debut in the Google Pixel 3, which we suspect is being saved for October. Google has also partnered with several Android makers to support the beta.

Will i get Android P beta?

There’s a better chance that the Android P beta works with your phone than the Android O beta did a year ago, simply because Android P is on more devices. That got audible cheers from the Google IO crowd.

Phones that will get Android P:

• What is Android P?

It is the next version of Android for the year 2K19. ;p

• When can you get Android P?

The final version will be released on August 2018. Stay tuned for our upcoming post.